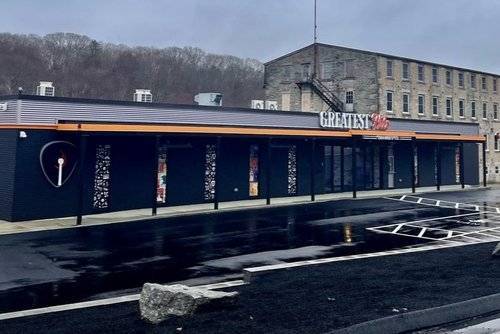 Greatest Hits Cannabis Co., a retail dispensary meshing cannabis and music, will open its flagship location at a 158-year-old mill in Dudley on Tuesday.

The dispensary is the first of a planned retail cannabis brand which owners Joseph Villatico and Rhett Jordan hope to eventually push throughout the East Coast.

“My whole life, part of why I smoked cannabis and wanted to be involved in cannabis was because I had such a positive socialization with pot and music,” said Jordan. “We wanted to take the corporate out of cannabis and bring the fun back in.”

The entrepreneurs’ plan for restoring the bond between cannabis and music involves partnerships with local venues to create concert series, said Jordan, mentioning the Indian Ranch music venue in Webster as one partner.

Greatest Hits has a large parking lot on its property, where the company plans to construct a stage and host a quarterly on-site concert for national touring acts.

The 4,000-square-foot retail shop will soon be joined by 170,000 square feet of cultivation and manufacturing space, which is under construction. The dispensary is located at 35-37 Chase Ave. inside a renovated mill, which had been used as coffin manufacturer during the Civil War, a paper mill, and, most recently, Drafter’s Sports Cafe.

About 40 new employees have been onboarded for Greatest Hits’ opening, and the full project is set to employ a total of 400.

Jordan and Villatico, who is a Webster native, gained approval for the project in December 2020 under the name DMA Holdings.

The company’s expansion is already spreading, as facilities in Taunton and Lynn are planned to open before the end of the year.

Jordan and Villatico have plenty of experience building a cannabis brand; Jordan founded Native Roots in Colorado back in 2009 when the industry was still getting started.

“Coming from Colorado, I’ve watched this industry grow since 2009 when I started my business,” Jordan said. “After seven years of establishing an industry in Massachusetts, I think the consumer needs to be taken care of.”

Native Roots now has 20 locations and, like Greatest Hits, is vertically integrated with manufacturing and cultivation components.

A ribbon-cutting ceremony for the shop’s soft opening is planned for Tuesday, with a grand opening scheduled in May.

Facebook Instagram Twitter Linkedin
Please Consume Responsibly. This product may cause impairment and may be habit forming. For use only by adults 21 years of age and older. This product has not been analyzed or approved by the FDA. There is limited information on the side effects of using this product, and there may be associated health risks. Marijuana use during pregnancy and breast-feeding may pose potential harms. It is against the law to drive or operate machinery when under the influence of this product. KEEP THIS PRODUCT AWAY FROM CHILDREN. There may be health risks associated with consumption of this product. Marijuana can impair concentration, coordination, and judgment. The intoxicating effects of edible products may be delayed by 2 hours or more. In case of accidental ingestion, contact poison control hotline 1-800-222-1222. This product may be illegal outside of MA.
© 2022, GREATEST HITS CANNABIS CO. All Rights Reserved.

Gain access to exclusive products and giveaways and receive updates about events.